Strictly limited edition signed artist proofs on heavy card stock advertising the great debate between Ron Fuller and Bob Roop! This limited edition poster is one in a series of event posters advertising the events at the Championship Wrestling From Florida Fanfest, WrestleMania weekend 2020. Only a small run of these have been printed for the event, grab a copy now or cry later!

The Great Debate: Ron “Tennessee Stud” Fuller vs. Bob Roop.
Over 40 years in the making, a “no holds barred” discussion between two bitter rivals. These two legendary wrestlers and bookers come face-to-face for the FIRST TIME since 1979 when Roop and four other wrestlers abruptly left Fuller’s Southeastern Wrestling promotion and formed their own group. Fuller has been outspoken on his weekly podcast about his trusted talent trying to steal his territory and the controversial “Plan B” Video, which would have exposed the business had it been released to the public. Nobody could get these two personal rivals in the same room to debate this hostile takeover attempt until NOW! 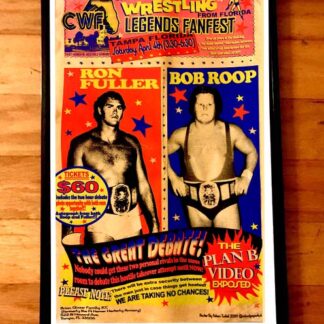